Economic reforms are urgent, especially improving the governance in state-owned enterprises, as large contingent liabilities are of great concern. 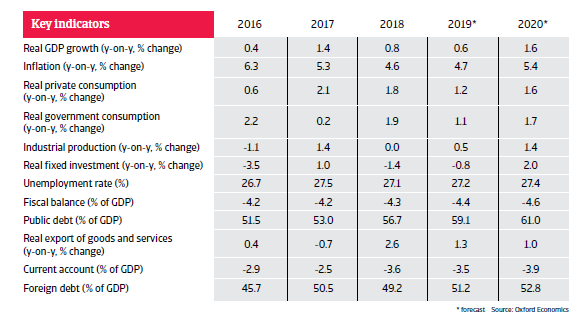 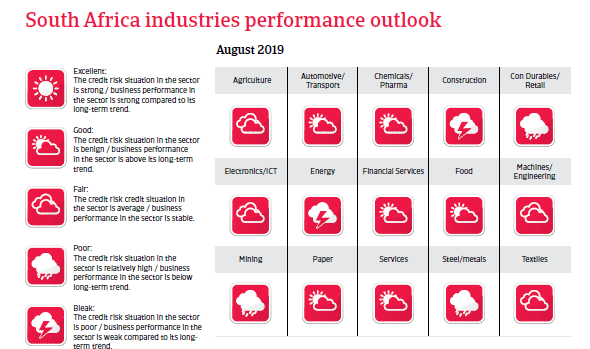 A reform-minded president in power

While the African National Congress (ANC) won the May 2019 parliamentary elections with 58% of the vote, it was a poor result for the party (the ANC never before received less than 60% at a national election). Many voters were disappointed by economic stagnation and endemic corruption under President Ramaphosa´s predecessor Jacob Zuma, who ruled from 2009 to 2018. The disappointment was also reflected in the low election turnout of just 46%. The Democratic Alliance (DA) came second with 21% of the vote, but still appeared unable to attract more black voters.

President Ramaphosa is known to be business friendly and plans to implement reforms to improve the business climate and to combat corruption. The still comfortable majority in parliament provides him with a solid public mandate to introduce structural reforms in order to revive the economy. However, he will face economic and political challenges. Ramaphosa won the ANC leadership with just a small majority, and strong fractions within the party still resist reforms. Therefore, it remains to be seen if he can implement effective and lasting policies to combat corruption and to improve governance. He will probably have to make compromises to keep unity within the ANC. There is still uncertainty over ANC plans to introduce a national minimum wage and to expropriate land without compensation.

The South African social climate remains problematic, with a high crime rate, illegal immigration, inequality and poverty. The business environment still suffers from several shortcomings: Despite the high unemployment rate, there is a shortage of skilled labour, especially in the technical sector. Another problem is infrastructure bottlenecks, especially power shortages. Moreover, the black economic empowerment (BEE) programme, designed to raise the black population’s share of the economy through fixed quotas and shares, could discourage foreign investment due to the skills shortage. Finally, high HIV/AIDS rates among the working age population is a serious issue. 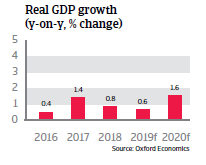 South African economic growth was weak at less than 1% in 2018, and the sluggish performance continued into 2019. Political uncertainty ahead of the May 2019 general elections and temporary cuts in the electricity supply had a negative impact on business and consumer confidence, and economic growth. In Q1 of 2019 GDP contracted 3.2% quarter-on-quarter, the largest decline since the 2008 global financial crisis. Both manufacturing and mining performance were heavily affected by load-shedding. Additionally, manufacturing is impacted by tighter labour market regulations set up by the previous government, while investment in mining has dried up due to large strikes and plans to increase the share of company equity held by black investors.

While confidence indicators are expected to gradually improve in H2 of 2019 due to the election outcome, economic growth will remain subdued in 2019 and 2020, as it will take time for reforms to show effects.

According to Statistics South Africa, business insolvencies increased 30% year-on-year between March 2018 and March 2019, while business liquidations even rose by 53% between April 2018 and April 2019. Given the subdued performance of manufacturing, mining and the fact that consumer-related sectors struggle with weaker household spending, it is expected that business insolvencies and liquidations will increase further in 2019.

Solving the Eskom issue is crucial 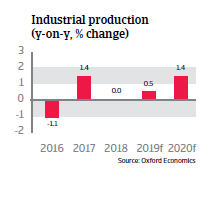 The highly indebted state-owned energy utility Eskom needs a drastic restructuring soon. The company, which accounts for 90% of electricity generation in South Africa, has been plagued by corruption, mismanagement and a bloated organizational structure. Lack of investment in infrastructure improvement has led to the necessity of regular load-shedding. Eskom´s debt amounts to about USD 30 billion, most of it covered by state guarantees, equivalent to 5% of GDP. A company default could have a crippling effect on government finances and the economy as a whole.

Currently the government is planning to split the company into three parts, and is setting aside ZAR 23 billion (USD 1.6 billion) to help Eskom finance its debt service payments. However, additional investment is required to get Eskom back on its feet and improve the electricity supply. More private sector involvement is considered, but also politically challenging due to resistance from powerful trade unions. 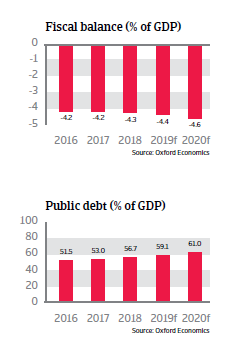 The Eskom issue is putting additional pressure on already strained public finances. Due to high public spending and low economic growth, public debt increased from 26% of GDP in 2008 to 57% in 2018. The fact that more than 90% is denominated in local currency mitigates the exchange rate risk. However, a large part of this local currency debt is held by non-residents, making it vulnerable to changes in market sentiment.

Supporting Eskom is one of the main reasons that the budget deficit will increase further in 2019 and 2020. South Africa had structural budget deficits for years, but should reduce them in order to keep public debt sustainable in the future. It remains to be seen if higher taxes and wage bill reduction will help to contain the increase in public debt. If the fiscal consolidation process goes off track or public debt turns out much higher than expected, South Africa risks losing its investment-grade credit rating by Moody’s. In 2017, both S&P and Fitch already downgraded their sovereign external ratings to sub-investment due to concerns about the fiscal consolidation path and debt sustainability. A downgrade by Moody’s would make external borrowing more expensive, and could lead to substantial capital outflows.

South Africa´s current account is heavily reliant on commodity exports, and therefore vulnerable to price changes and/or global economic slowdowns (especially in China). The country remains highly dependent on foreign capital inflows (mainly portfolio investment) in order to finance its persistent current account deficits. This dependency makes the South African rand susceptible to changes in investor sentiment. Historically the rand has been a very volatile currency, and any capital outflows triggered by political or economic uncertainty, US monetary tightening or increased protectionism could easily put the currency under pressure.

Next to keeping investment grade rating, maintaining a positive (and high) interest differential with the US is necessary to support portfolio investment inflows. The US Federal Reserve is expected to maintain its current benchmark interest rate for the time being, or even to lower it. This provides the South African central bank with some scope to lower the interest rate (currently at 6.75%), but this scope is quite limited due to the weak rand.

The South African banking sector is healthy and well supervised, but risks have increased due to the high exposure to heavily indebted state-owned enterprises and the high household debt. Profitability declined somewhat, but was still high, and the level of non-performing loans remained low despite an increase.