Respondents in Japan have maintained their credit friendly stance, trading on credit to nurture long-term cooperation and expand business domestically and internationally. In 2018, respondents reported an increase in overdue B2B invoices and a longer time to convert B2B invoices into cash. Bankruptcy and high costs to pursue debtors are top reasons for writing off B2B receivables as uncollectable. What has changed over the course of the year, what are the main reasons for payment delays and what was reported about payment practices by industry? 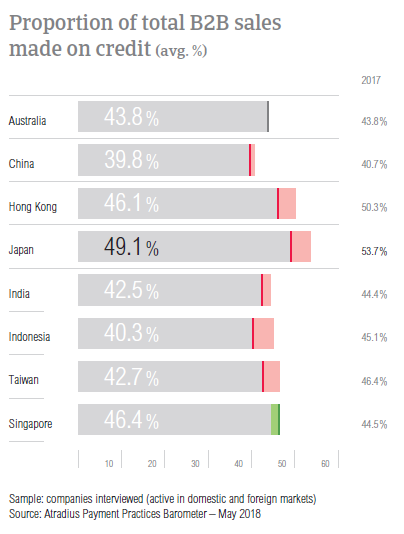 Historically, respondents in Japan have been the most inclined to sell on credit terms in the Asia Pacific region. Despite a decrease of almost five percentage points this year, survey results point to the same open stance with 49.1% of B2B sales made on credit. Respondents are clearly more comfortable selling on credit to domestic B2B customers, for which the proportion of total B2B sales made on credit is much higher than that registered with foreign B2B customers (56.5% versus 41.7%).

Japanese respondents said that they are granting trade credit to their domestic B2B customers mostly because their creditworthiness has been well established over long-term business relationships and because it is the usual business practice. Credit sales are also perceived as a way to ensure cash flow and expand business domestically. While very inclined to offer credit to domestic B2B customers, 61.9% of respondents in Japan said that poor payment behaviour of customers would result in them refusing to grant credit terms. Other frequently cited reasons why companies here refuse to grant trade credit to their domestic B2B customers are a lack of information on the customer’s business and payment performance and the financial weakness of the customer (each of these reasons were mentioned by 42.9% of respondents).

We offer credit terms based on our trading experience and if the customer’s has a high creditworthiness.

Japanese companies grant trade credit to their foreign B2B customers to further generate sales and expand their international activity. Similarly to what was mentioned in regards to domestic B2B customers, Japanese respondents use credit sales because it is common practice in the industries they operate in. Respondents in Japan refuse credit sales to their foreign B2B customers because of high economic and political risk in the customer’s country and because of the customer’s poor payment behaviour (each of these reasons was mentioned by 54.6% of respondents).

We trade on credit because it is common practice. 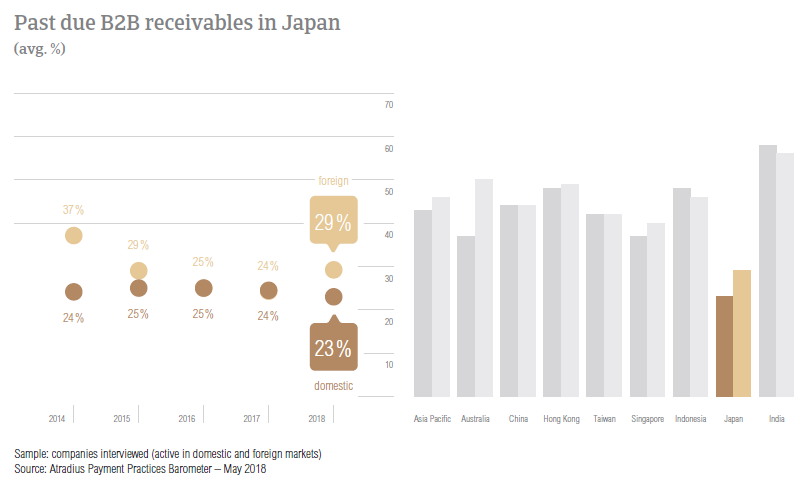 In 2018, the average Days Sales Outstanding (DSO) figure recorded in Japan is 44 days, one day longer than in 2017. Most respondents in Japan (84.6%) do not expect any changes in their company's DSO over the coming 12 months. Of those who foresee a change, 9.3% expect a slight increase and 3.9% a slight decrease. 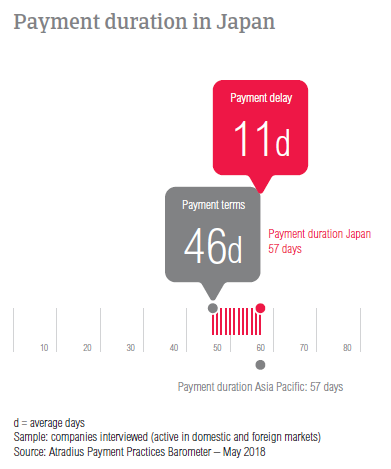 Among the Asia Pacific countries surveyed, Japan had the second highest percentage of respondents (42.7%) who stated that payment delays did not have a significant impact on their businesses. Of those who have experienced an impact, 10.8% said that they needed to take specific measures to correct cash flow and 9.2% that payment delays led to revenue loss.

In 2018, respondents in Japan need a longer time to convert B2B invoices into cash. The average payment duration in Japan increased from an average of 55 days in 2017 to 57 days this year.

Limited use of electronic invoices

Among the Asia Pacific countries surveyed, Japan had the highest percentage of respondents (49%) who said that they are not invoicing their domestic and foreign B2B customers electronically. This may be due to the fact that paperless invoicing is not permitted without explicit approval from the tax authorities in the country. 32% of respondents said that they make use of e-invoicing and 15% that they intend to start doing so in 2018.

Asked about the effect of e-invoicing on payment duration, the survey results are inconclusive. 53% of respondents said that after invoicing their B2B customers electronically, they received payments quicker and 46% that e-invoicing had no noteworthy effect.

The fear of turnover losses due to trade uncertainty and global protectionist measures is not as pronounced in Japan. 51% of respondents here said that they do not expect the developments at global level to have an effect on their company’s turnover in the coming 12 months. Among the Asia Pacific countries surveyed, only Australia had a higher percentage of respondents stating this.

Of the respondents who believe that their companies might be affected, 15% mentioned that they expect a loss in turnover of up to 10% and 14% expect the impact will likely range between 20% and 30%. In contrast, 6% of respondents in Japan – probably focusing primarily on domestic B2B sales – expect to be positively impacted by protectionism around the globe. 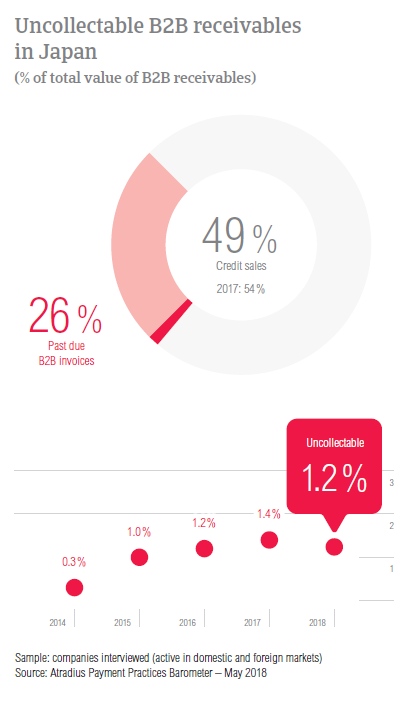 Uncollectable receivables originated most often from B2B customers in electronics, business services and services. A common problem in the entire region – the customer going bankrupt or out of business – was also the main reason for write-offs in Japan (mentioned by 56.9% of respondents). The second most frequently reported reason for write-offs is the high cost of pursuing debtors, stated by 33.9% of respondents in the country.

B2B customers in the electronics sector some of the slowest payers

As mentioned previously, Japanese respondents give their B2B customers 46 days, on average, to fulfil their payment obligations. B2B customers in the agriculture and textiles sectors are given the longest average payment terms (67 days and 54 days respectively). In contrast, B2B customers in construction materials are being asked to pay the fastest (on average, within 15 days).

Suppliers in Japan reported that B2B customers in the electronics and chemicals sectors have been some of the slowest payers. B2B customers in these sectors, paid on average 13 and 17 days after the due date. The main reasons behind the payment delays in the electronics sector are the inefficiencies of the banking system (reported by 37% of respondents) and disputes over the quality of goods delivered and services provided (mentioned by 32% of Japanese respondents). The same main reasons have been reported by 37% of respondents in the chemicals industry.

Looking ahead, most respondents in Japan (67% and 80% respectively) do not foresee any changes in the payment behaviour of their B2B customers in the electronics and chemicals sectors.

Growth has picked up again in 2017, and the positive trend is expected to continue in 2018, with both domestic demand and exports set to grow further.