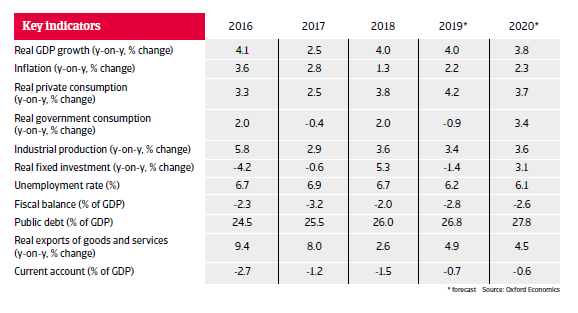 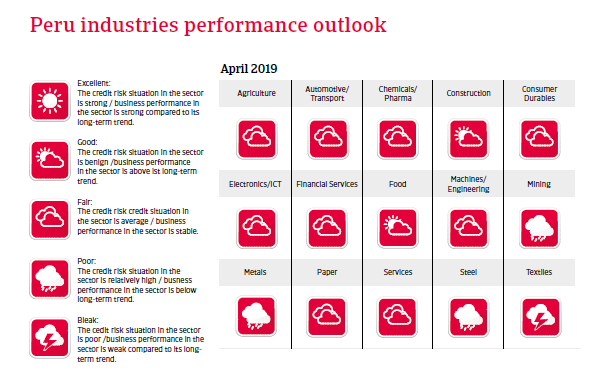 Vice president Martin Vizcarra took over presidency in March 2018 after incumbent Pedro Kuczynski resigned in order to avoid impeachment over a conflict-of-interest scandal. Vizcarra has launched some reform initiatives in order to improve the persistent institutional weaknesses and fight endemic corruption. Most of them (regulating financing of political parties, an overhaul of the appointment system for judges and prosecutors, banning immediate re-election of members of parliament) were approved in a December 2018 referendum.

Despite remarkable economic progress made in the last few years, the country still has to cope with high poverty and very large income inequality, especially between the coastal and the heartland regions. There are still social conflicts flaring up, mainly in the vital mining sector.

Peru’s small, open economy is highly dependent on minerals (copper, gold, oil and gas), which account for more than 60% of exports. The country has established trade agreements with the US, EU and China, among other markets. It is also a member of the Pacific Alliance as well as the new CPTPP and recently signed a new free-trade agreement with Australia. 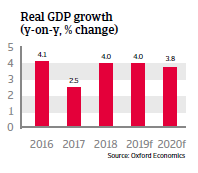 Annual GDP growth rates in 2019 and 2020 are forecast to be around 4%, sustained by higher commodity prices and robust domestic demand. Private companies are developing new mines. This is boosting private sector investment. Private consumption is growing on the back of rising household incomes and elevated consumer confidence. In 2019 and 2020, inflation is expected to remain within the Central Bank´s target rate of 1%-3%.

The government has a strong track record of prudent, business-friendly policymaking. The business environment is further supported by investment grade sovereign credit ratings, strong institutions, and a sound external environment. 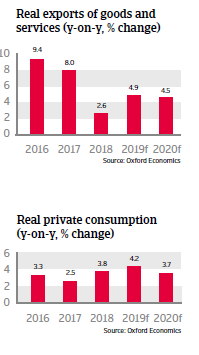 To sustain high growth rates going forward, the government needs to continue with structural reforms, such as reducing state bureaucracy, strengthening the judicial system, reducing the rigidity of the labour market, and improving infrastructure/education.

Peru’s liquidity situation is very strong, with international reserves amounting to 19 months of import cover, which is more than sufficient to cover external financing needs. Solvency is under control and the current account deficits are moderate. The solid liquidity and solvency ratio bolster Peru´s resilience against external economic shocks.

Main risks to Peru´s economic outlook are a hard landing of the Chinese economy and growing social unrest in the mining sector, which would negatively affect the investment climate. At the same time, Peru’s small, but well-capitalised and supervised financial sector is highly dollarised (i.e. the US dollar is preferred in large transactions and in savings), leaving it exposed to potential currency risks.

Despite increasing clouds on the horizon, there remain several bright spots for export opportunities in emerging markets.

The Americas - an increase of overdue B2B receivables

The percentage of overdue B2B invoices increased in 2018 impacting 64.1% of survey respondents in countries surveyed in the Americas.