The economy is currently forecast to expand by about 3.5% in 2020, however, this depends on decent performance in agriculture, tourism, and exports.

A stable monarchy, but risks persist

The political situation is rather stable. King Mohammed VI holds most political power in his hands. There is no immediate threat to the monarchy and establishment as the King is popular with the people.

However, social tensions have increased since 2017 due to lingering problems (high youth unemployment, income inequality, limited access to health service and corruption) periodically sparking protests in less developed parts of the country. The government has responded by accelerating social programmes and investment projects, but reforms that are more fundamental are not on the horizon. Nevertheless, widespread unrest is not expected in the short-term.

Morocco remains vulnerable to the threat from Islamic extremism. In particular, Moroccan fighters returning from Libya and Syria are a concern for the authorities. However, the country has not been hit by major terrorist attacks over the past few years. Preserving security to avoid a negative impact on tourism is very high on the government´s agenda, given the importance of tourism revenues for the economy.

Higher growth potential in the medium-term

Traditionally a leading producer of agricultural products and phosphates, Morocco has made structural reforms to diversify its economy by developing industrial manufacturing, especially export-driven sectors (cars, aeronautics and electronics), and to provide a favourable investment environment (tax breaks have attracted many investors).

Low unit labour costs and a slightly undervalued currency enhance Morocco’s competitiveness. Since 2000, GDP per person has increased by 70% in real terms. However, despite those major progresses some weaknesses remain. The country remains highly dependent on agriculture, which employs about 40% of the workforce, and volatility in agricultural output (e.g. due to adverse weather conditions) has a major impact on private consumption and the economy.

Economic growth is expected to decrease somewhat in 2019, mainly due to weaker demand from Europe. The economy is currently forecast to expand by about 3.5% in 2020, however, this depends on decent performance in agriculture, tourism, and exports. Inflation will remain below the 2% target of the Central Bank. This, together with an accommodative monetary policy and higher public spending should support private consumption growth.

The banking sector benefits from a strong regulation, with sufficient capital-adequacy ratios and liquidity levels. Although non-performing loan levels remain elevated (due to the exposure of banks to markets in Africa and declining asset quality in domestic sectors like construction) they are closely monitored, and provisions are made for 70% of the bad loans.

Ongoing subsidies and infrastructure investment keep public expenditures high, and the fiscal deficit is expected to increase in 2019, due to higher social spending in order to contain social protests. Public debt amounts to more than 80% of GDP, which is high compared to other emerging markets.

However, the profile of debt mitigates refinancing risks, as a large share of it (about 80%) is domestically financed, and average maturity has been extended to more than seven years. At the same time Morocco has successfully completed three consecutive precautionary & liquidity line (PLL) programmes with the IMF (on which it has not drawn), and a follow-up programme has been secured for the coming two years. This should reassure foreign investors and help to overcome the temporary lull in fiscal consolidation. The programme aims to reduce the fiscal deficit in 2020 and 2021, mainly with revenue raising measures including tax reforms. The receipts of a privatisation programme, which will also help to streamline heavily indebted state-owned enterprises, will further lower government financing needs.

Morocco´s external position is acceptable with a reasonable external debt level of around 45% of GDP. Revenues from tourism and remittances compensate a large part of the trade deficit while FDI inflows remain robust. The external financing need is more than covered by foreign reserves and can be easily met by strong support from official creditors (including IMF’s precautionary programme) and good access to the international capital market.

The Moroccan dirham is pegged to a currency basket of EUR (60%) and USD (40%). Recommended by the IMF, the plan is to move to a more flexible exchange rate in the medium-term - in order to protect the Moroccan economy better against external shocks and to improve its international competitiveness. However, this process will proceed very slowly in order to limit the risk of any short-term currency volatility. Meanwhile the risk of capital outflows has decreased due to the end of US monetary tightening. 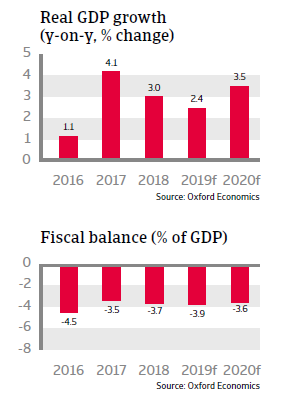 GDP growth is expected to recover only modestly as the oil fund is nearly depleted, and ongoing political uncertainty weighs on the economic performance.

Beside deterioration of payment behaviour in the private sector, the number of payment delays in larger projects dependent on government funding is still high.