Business conditions in 2016 are forecast to remain challenging. The outlook for insolvencies is mixed, and little to no improvement is expected across many advanced markets. This may be the reason why respondents in Western Europe seem to be more inclined to request payment methods from B2B customers which do not expose them to payment risk, than to use payment methods that do expose them to payment default risks. Although selling on cash terms results in lost sales, if the buyer really needs the flexibility of credit terms, the majority of B2B sales of respondents in Western Europe seem to prefer this approach.

Selling on credit to domestic and export B2B customers

Despite some exceptions (Denmark, Ireland, France), the tendency of respondents to be more trade credit friendly with domestic than with foreign B2B customers appears to be fairly uniform. The likelihood of granting trade credit in B2B transactions, in contrast, varies markedly by country. Year-on-year fluctuations in the credit sales value at country level will be expanded on in the country reports that form this edition of the Payment Practices Barometer for Western Europe.

The largest proportion of overdue payments were generated in the agriculture, machines, consumer durables, metals and construction sectors (around 40% of the invoice value ends up in late payments). Late payment of B2B invoices due to insufficient availability of funds from customers are reported to occur most often in the agriculture and machines sectors (around 60% of the respondents). Customers’ intentional use of outstanding invoices for financial advantage, which is the second most frequently cited reason for late payment of invoices, is most often reported in respect to customers from the construction industry (around 42.0% of respondents).

The majority of the respondents in Western Europe (55%) don’t expect changes in the payment behaviour of B2B customers over the next twelve months. An overall deterioration is expected from twice as many respondents (31.0%) than those expecting an improvement (14.0%). This is mostly the case from B2B customers in the agriculture, construction, consumer durables, metals and machines sectors (around 40% of respondents each).

A quite staggering percentage of respondents in Western Europe (92.4%) reported that domestic B2B customers paid invoices late over the past year. This resulted in an average of 40.3% of the total value of domestic invoices remaining unpaid past the due date. Neither percentage changed in the past year. Late payment from foreign B2B customers, instead, appears to have risen slightly, as the percentage of respondents reporting it increased to 84.6% from 82.1% in 2015. There was also a small increase, to 38.3% from 35.4% last year, in the average total value of foreign B2B credit-based sales paid late. This increased exposure of respondents’ in Western Europe to payment risk from foreign customers may corroborate respondents’ perception that trade credit risk is slightly more likely to arise from transactions with foreign than with domestic B2B customers.

In Western Europe, Italy appears to be the most impacted by late payment of invoices from domestic B2B customers. This was reported by 96.0% of respondents, and resulted in an average of 49.4% of the total value of domestic B2B invoices unpaid by the due date. These findings are in line with the DSO level observed in the country, averaging 82 days and being the longest in Western Europe. Greece follows (49.1%), with a DSO averaging 53 days. Domestic B2B invoices were paid the most promptly in Sweden. Here, an average of 24.3% of the total value of domestic credit-based sales (up from 20.0% last year) ended up in late payment, with late payments reported by 87.2% of respondents. 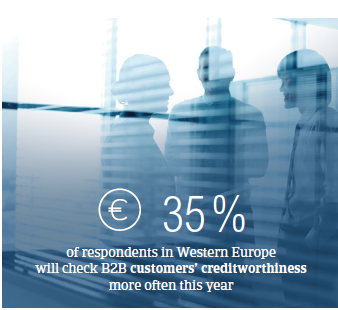 The country most adversely impacted by late payments from export customers seems to be Great Britain. 46.4% of the total value of British credit sales to foreign customers were reported to be paid late with 92.1% of respondents in the country experiencing late payments. These findings are comparable with the increase in foreign payment duration in Great Britain observed earlier, pointing to a deterioration of the quality of British suppliers’ export trade debtors over the past year. This is reflected in the DSO reported by respondents, averaging 59 days and being the second longest in Western Europe, after that of Italy.

With only 31% of respondents being impacted by late payment from customers abroad, and 14% of the total value of foreign invoices paid late, Greek respondents were the least hit by late payment of invoices by foreign customers. This may explain why they appeared to be among the most likely in Western Europe to grant trade credit to foreign B2B customers. On a country basis, the frequency of late payment and the related total value of past due invoices varies widely. These will be expanded on in the country reports of this edition of the Payment Practices Barometer.

Getting paid on time by B2B customers can be the toughest and riskiest part of granting trade credit. This is particularly the case in the current business environment, where the culture of late payment appears to have become the new normal. In this context, respondents in Western Europe tend to try to minimize payment risk by keeping the time it takes to turn credit sales into cash as short as possible (around 30 days or less from the invoice date). This is the case for the majority of the countries surveyed, except for Greece and Italy. In both countries, respondents’ domestic and foreign B2B customers seem to be extended considerably longer terms for settling invoices (averaging each around 50 days from invoicing) than that of the average for the region. This seems to reflect a customarily more lenient payment culture observed in Southern than in Northern and Central Europe. 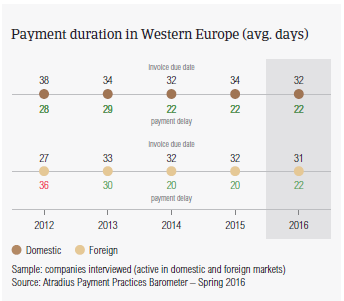 Compared to last year, average payment terms granted by respondents in Western Europe remained almost stable. This may reflect respondents’ perceptions that, over the past year, there was no significant improvement in the level of payment risk arising from either domestic or foreign B2B trade. This perception, which prompts businesses to tighten terms to offset payment delays, appears to be notably strong in Greece. Here average payment terms extended to both domestic and foreign customers are now nearly ten days shorter than one year ago.

This is the case for Belgium as well, where average domestic payment terms are around one week shorter than last year.

For more information on payment terms by country see the Statistical Appendix and the country reports of this edition of the Payment Practices Barometer.

Despite the attempt to offset payment delays by extending short payment terms, respondents’ domestic and foreign overdue B2B invoices are settled by customers, on average, around three weeks late. Domestic customers of Greek respondents settle their overdue payments the slowest (on average 36 days late), and those of respondents in Sweden the swiftest (on average 9 days late). Foreign past due invoices, in contrast, are settled the slowest in Great Britain (an average of one month late) and the fastest in Greece (an average of one week late). 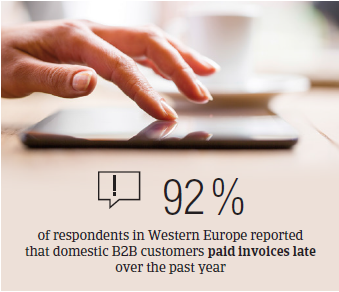 Compared to one year ago, average payment delays across almost all the countries surveyed did not vary considerably. The exception is Great Britain, where respondents currently have to wait an average of one week longer than last year for domestic and foreign past due invoices to be settled by customers. This despite a slight decrease (around 2 days) in domestic, and no variation in foreign payment terms. This can have an adverse impact on cash flow position, increase the costs of carrying trade receivables and reduce working capital that could otherwise be invested in supporting and growing the business through the normal business cycle. Totally opposite is the scenario in the Netherlands, where respondents’ domestic and foreign B2B customers pay overdue invoices, on average, one week earlier than last year. This resulting in an improvement in the financial position of businesses in the country (the Netherlands is forecast to see the most improvement in insolvency levels this year).

Intentional use of outstanding invoices 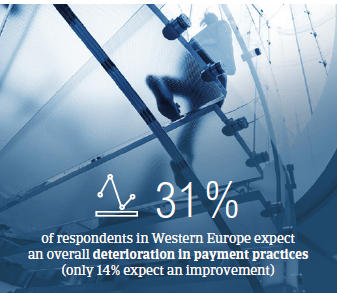 As already observed in past surveys, these two reasons for payment delay can be seen as two sides of the same coin, as liquidity issues could be claimed by customers to hide their deliberate use of outstanding invoices to finance their business. It is worth mentioning, however, that respondents in Western Europe (around 26.0%) put late payment of foreign invoices very often down to reasons that are independent of the financial soundness of their customers.

These are complexity of the payment procedure, which worries Danish respondents the most (nearly 35% of respondents), and inefficiencies of the banking system (the most concerned in this respect are British respondents, nearly 37%). These findings seem to corroborate respondents’ perception that trade credit risk is more likely to arise from foreign than from domestic credit-based sales.

Ripple effect throughout the supply chain

Regardless of the reason why customers pay invoices late, this behavior appears to have adversely impacted respondents in Western Europe in a number of ways: ripple effect throughout the whole supply chain (23.7% of respondents having delayed payment to their own suppliers due to late payment from B2B customers), loss of revenues and a need to take specific measures to correct cash flow (reported by nearly 20.0% of respondents alike). This means financial pressure on businesses.

Furthermore, just over one in ten respondents had to request a bank overdraft extension, and to pursue additional financing (from banks, factors, etc.). This increases the financing and administrative costs associated with carrying trade debt. This may explain why the highest percentage of the respondents in Western Europe (24.0%, stable with last year) continue to consider cost containment to be one of the biggest challenges to profitability they will be facing this year. Exceptions are respondents in Denmark, who appear to be more concerned about a likely fall in demand for their products and services (27.2% of respondents) and in Great Britain and Ireland (around 23.0% of respondents alike) who feel pressured to maintain adequate cash flow levels this year.

Therefore, protection against payment risk arising from selling on credit is of paramount importance to protect business profitability. Respondents in Western Europe appear to be well aware of this (around 45% reported they will not change their mix of credit management tools) and in light of the challenging conditions in which they operate, they reported they will check the creditworthiness (34.8% respondents), track record (32.7%) and credit risk monitoring (28.7%) of customers more frequently over the next 12 months. It is worth mentioning that just over one quarter of respondents will sell more on a cash basis in B2B trade, and request of secured forms of payment more often. On a country basis, the mix of credit management tools varies notably and will be expanded on in the various country reports. 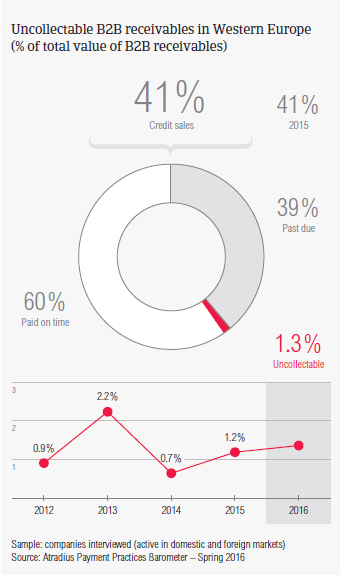 Reasons for write-offs of uncollectable receivables

B2B receivables were reported to be uncollectable mainly due to the customer being bankrupt or out of business (59.3%, down from 66.4% of respondents).

Although less frequent than last year, this reflects the still difficult business climate in which businesses operate. Respondents reported that write-offs were also due to one or more of the following reasons: failure of collection attempts (nearly 29.0% of respondents), high costs of pursuing debtors (25.6%) and debts being too old (20.6%). Over the past year, the oscillation of the uncollectable rate is almost equal in relation to both domestic and foreign receivables.

Robust domestic demand expected to continue in 2016, but smaller players are struggling.