Inflation expectations yet to decouple from ECB target

Inflation expectations not yet decoupled

Despite rising inflation in the eurozone, we argue it has not yet sprung loose from the ECB target in the medium term

High inflation is the current hot economic topic. In June, inflation was running at over 11% in the Netherlands; for the eurozone it was nearly 9%, which is surely a record. It is also sure that the inflationary bite is being felt, particularly in the purchasing power of lower income groups. The question is, how long will this high inflation last? In recent months, energy prices have gone through the roof (see figure 1), with geopolitical developments playing a major role. If the pressure on these prices abates, inflation will also ease off. In principle, the monetary authorities should then not need to intervene much, if at all.

But the ECB has decided not to wait any longer. In its press conference of 9 June, it announced its intention to raise its policy rates by 0.25% in July, and to end its bond purchasing programme. Moreover, it indicated a further interest rate increase in September, this time of 0.5%. But that will depend on how inflation pans out.

In this article we will look at inflation in the eurozone. Using simple calculations, we will explain how, in our view, the current high level of inflation in the eurozone will not be sustained. The main reason for this view is that a recurrence of the energy price explosion is unlikely. In addition, eurozone unemployment, which is far from negligible (over 7%) is weighing on wage rises, thus limiting second round effects of inflation. In this respect, the ECB acts as a lock on the door. Yes, inflation expectations are rising, but have not yet de-anchored from the official target of 2%. 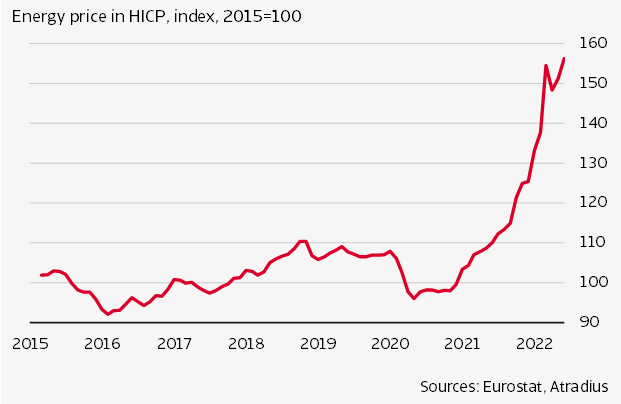 Energy prices have played a major role in the high inflation of recent months (figure 2). Yet this accounts for a relatively limited share (11%) of the total price index. However, on a year-on-year basis, the energy component has shot up by as much as 42% in June, which had a very sizeable effect on the total price index. Thus nearly half of HICP inflation in June this year - 4.0% points - can be attributed to higher energy prices. Food (including alcohol and tobacco) accounted for 1.9% points, and core inflation stood at 2.6% points. 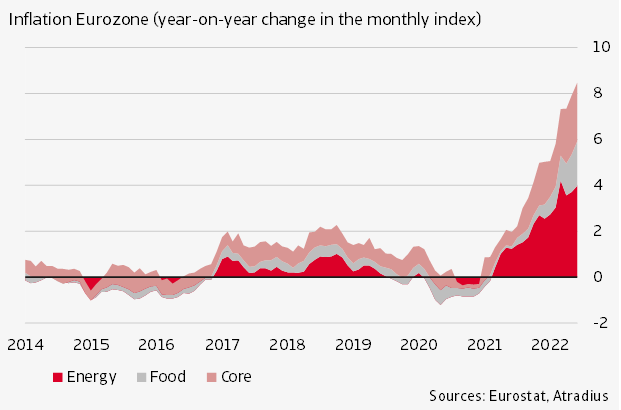 Instead of looking at the contributions of the components energy, food and core, if we focus on the rise of these individual categories, the numbers are even more spectacular: besides the 42% for energy (year-on-year), we see 8.9% for food and 3.7% for core inflation. Clearly, inflation is not only happening in energy prices, food prices have also risen and even core inflation is currently running well above 2%.

Rising energy and food prices may be regarded as temporary. However, when core inflation goes up, this is a sign that inflation is filtering through to the rest of the economy. Moreover, core inflation has already been above the target rate of 2% since October 2021. This will also have played a part in the ECB’s decision to adjust its inflation expectations upwards for 2022 and 2023. That said, there is still an expectation that inflation will subside, a consideration that is reflected in the moderate extent of ECB’s intervention.

Although the ECB has factored in a decline in inflation, it did not give specific reasons for this in its press release. But of course, it has its reasons. We will first look at the arguments in favour of this view. We then present our calculations, based our core argument: a recurrence of the energy price rise is unlikely.

First, underlying factors which have kept inflation moderate in recent decades have not disappeared. At most, they have been somewhat weakened by the pandemic. These factors include (i) globalisation, which weighs on prices thanks to competition from more suppliers; (ii) digitalisation, which makes pricing more transparent; (iii) weak wage growth: from low labour participation, a decline in trade union membership and competition from foreign workers, partly through migration; and (iv) population ageing, which leads to lower aggregate demand as consumer spending declines with age. While globalisation (and migration) may have cooled a little from the pressure of the pandemic and geopolitical tensions, a reversal of globalisation would appear to be out of the question.

Second, the rise in inflation from the second half of 2021 was initially triggered mainly by the recovery of economic activity after the pandemic. During the pandemic, aggregate demand was propped up mainly by support from governments. But because services such as hospitality, events and travel were mostly closed, demand shifted to goods such as electronics, household appliances and (outdoor) sports goods. This increased the pressure on the international supply chain, which was reflected in long delivery delays and price increases. There were logjams in transport, particularly in container transport, which also pushed up prices. Now that the pandemic has become more endemic in nature, and most sectors have re-opened, the demand for services will increase. Relative demand for goods will lessen, as will the pressure on international supply and transport chains. Thus one source of inflation will lose its strength. This process will be further reinforced by a decline in demand on the back of reduced purchasing power – itself a direct result of inflation. Early signs of this process are already visible in the easing of supply chain pressure (figure 3). 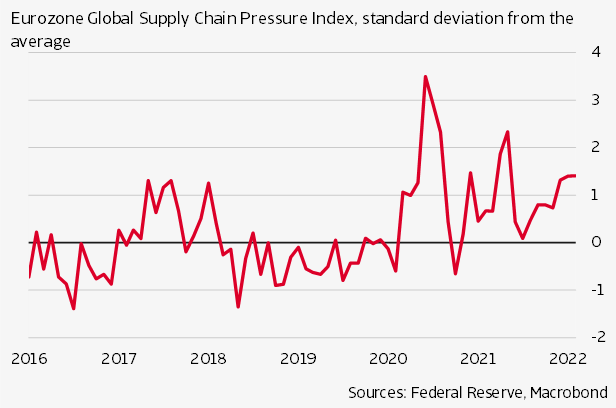 Third, for future inflation development, it is important that current inflation is sufficiently absorbed by the economic agents to prevent new imbalances in the economy. In this respect, wage development is crucial. It is important that companies are not saddled entirely or largely with the burden of inflation, because they would then set in motion a spiral of price and wage rises. So far, this is not the case in the eurozone. Wage rises remain limited at around 3% (figure 4). 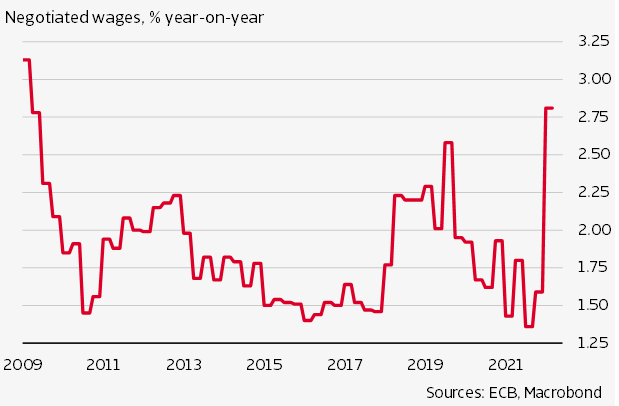 This falls well short of the 8% inflation rate and will act as a brake on any tendency of European companies to shore up prices.  In the wage bargaining process, important considerations are the above issues such as unchanged inflationary pressure from underlying factors and easing pressure in the supply chains. The role of the ECB as guardian of the euro also plays a part: do the economic players expect that the ECB will ultimately be able to guarantee price stability through adequate policy response? These elements coalesce in the inflation expectations. Although these have gone up, they do not currently give reason for undue concern (figure 5). 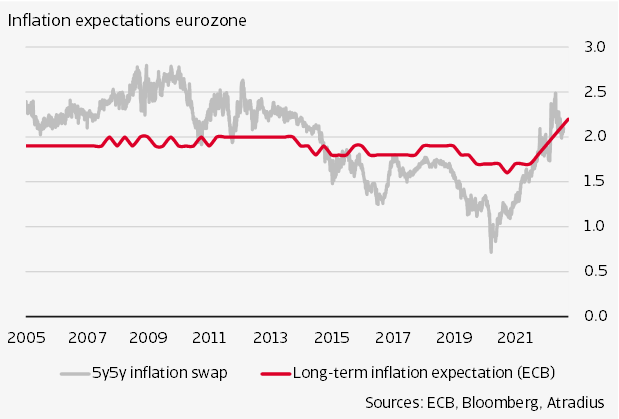 The picture generated by this reasoning is one of inflation that is not sustainable at the current high level. We now substantiate this further with our calculations which are based on a temporary rise in the energy and food indices.

We calculate the expected inflation from June 2022 to end 2023 in a simple manner. This involves looking at the year-on-year percentage changes in the monthly index – for example the difference between June 2022 and June 2021. We took the following approach.

For the period concerned, we calculated the price index of the components energy, food (including alcohol and tobacco) and core. The basic premise for the development of the indices of energy and food from June 2022, is the average of the rise in the sub-index for the period 2015-2019. Thus our conclusion is that the current state of energy and food price development cannot last. We will explain why.

With regard to the energy prices, we base our view on the underlying reason for the recent price rise: the war in Ukraine, and in particular the ensuing sanctions. These have pushed oil and gas prices to unprecedented heights. However, any further rise would require a second shock, such as major disruption to the Russian oil and gas supply. This could conceivably be an effective boycott of Russian oil or Russia turning off the gas supply to Europe. However, we don’t see this happening yet. True, with its sixth package of sanctions, the EU has aligned with the G7’s oil boycott, but the EU boycott will not take effect for another six months. Moreover, the G7 is working towards limiting the effect of the sanctions on oil prices. Yes, it appears Russia is reducing gas deliveries. But it is highly questionable whether gas deliveries will be fully stopped; it is certainly not in Russia’s interest to lose this easy source of money – especially at current high prices – to fund its war. Russia’s actions in this regard may prolong turbulence on the energy markets. However, we concur with the expectations of the World Bank and the OECD that energy prices will gradually stabilise. The same is true for food prices, with the pressure on supply from the production and delivery problems in Ukraine being absorbed by ramped-up production in other countries, such as the US, Argentina and Brazil. 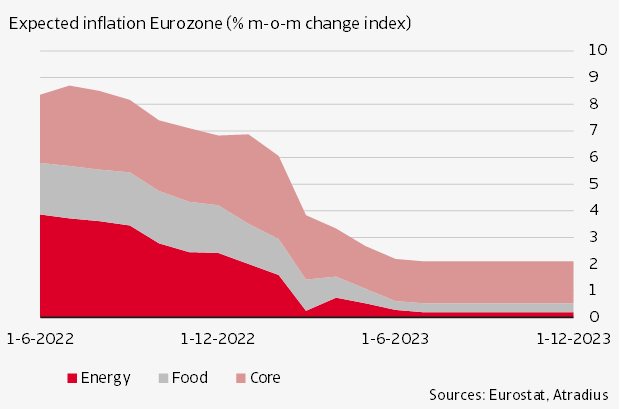 Figure 6 shows the result of the calculations: eurozone inflation will have peaked in July this year and the rate will slide gradually until the end of the year, followed by an acceleration of the downward trend from early 2023. This will culminate in inflation of just over 2% by the end of 2023.

Just to give an idea of the effect of the calculation: In June, the energy index stood at 156 and we estimate it to reach 160 by the end of 2023. Food inflation will go from 121 to 124. These numbers represent increases of 2.5% and 2.4% respectively. Our estimates for core inflation are based on a shorter and more recent period, i.e. the average rise of the sub-index from July 2020 to June 2022. We factor in a second round effect of current inflation as well as the underlying (downward) pressure on inflation that we have explained above. For the forecast period until end 2023, the core inflation index will rise from 111 to 114, which represents an increase of 3.3%. To calculate the HICP, we used the weights of the sub-indices from June 2022.

The figure clearly shows that the energy component has an over-sized role in current inflation. This effect is evident from the (expected) energy sub-index, which, according to our calculations will reach 157 in December 2022 – a rise of 26% on the December 2021 index. However, if we look at the index for March 2023 and compare it with March 2022 when it stood at 154, we see a rise, i.e. inflation, of just over 2%. In other words, the inflationary spike of 2022 is matched by its mirror image in a drop in 2023. This is a simple, but powerful mathematical conclusion which does not require any further assumptions. The current high inflation is not here to stay.

Our calculations result in an average HICP of 7.9% in 2022 and 3.5% in 2023, with core inflation running at 3.6% and 2.9% respectively. This compares with the ECB’s reckoning for HICP of 6.8% and 3.5% respectively for 2022 and 2023 and average core inflation of 3.3% and 2.8%. Thus inflation expectations have not yet sprung loose from the official target rate, and the ECB’s current moderate policy appears justified.

Economic disruptions from the war in Ukraine, lingering lockdown restrictions and multi-decade high inflation have generated a new set of adverse shocks for the global economy

The Covid-19 pandemic and the Russia-Ukraine war pose challenges to global value chains.