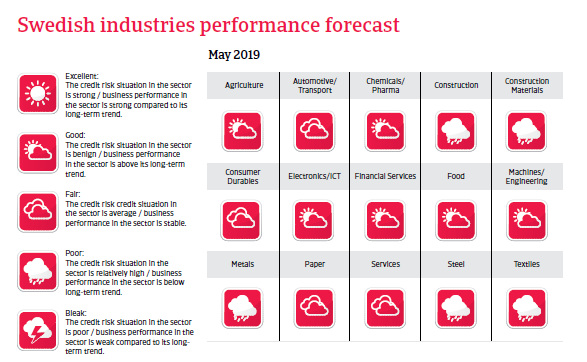 Insolvencies increase again in 2019, although less than in 2018

Swedish business insolvencies increased in 2017 and 2018 after three years of annual decreases. In 2019, another 3% increase is expected, mainly due to upward carry-over effects from the large increase seen in 2018. 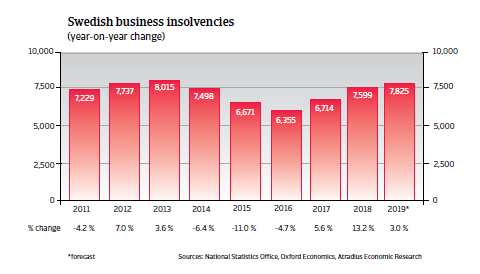 GDP growth expected to slow down in 2019

In 2017 and 2018 the Swedish economy grew about 2.5% annually, supported by a loose monetary policy, robust domestic demand and solid investment and export growth. In 2019, the economic expansion is expected to slow down to below 2%, as both domestic and external demand weakens. As a small open economy highly dependent on exports, Sweden is susceptible to a potential downturn in global trade.

In order to combat deflation and to weaken the currency, the Swedish Central Bank has repeatedly lowered the repo rate since July 2014. Despite a hike in December 2018, the rate remains negative at -0.25%. Inflation is expected to remain close to the Central Bank´s target of 2% in 2019 and 2020.

A potential downside risk to the economy remains high household debt, triggered by housing demand and easy access to credit. Despite a tightening of mortgage amortization requirements the household debt-to-disposable-income-ratio was still more than 180% in 2018, making private households vulnerable to sharp decreases in house prices and interest rate hikes. However, healthy public finances provide room for fiscal loosening in case of an economic downturn.

Competition in the Swedish construction sector is high and consolidation is ongoing, with financially stronger groups buying financially weaker peers.

Western Europe: an increase in past due B2B invoices

After a minor increase from 2016 to 2017, the proportion of past due B2B receivables in Western Europe increased again this year and stands at 41.8%.

Sweden: the biggest increase of overdues in the region

The proportion of past due B2B invoices in Sweden has sharply increased from 26.7% in 2017 to 34.0%. Foreign B2B customers had a much higher default rate.