China's economy: a slowdown of GDP growth to less than 5% in 2022, while several downside risks could hamper domestic consumption and export performance

A difficult balancing act due to the war in Ukraine

Overall, the political situation in China is stable, with the Chinese Communist Party (CCP) firmly in power. President Xi Jinping has consolidated his power within the CCP, and is perceived as the most powerful Chinese leader since Deng Xiaoping. It is expected that President Xi will seek a third five-year term as General Secretary of the CCP at the 20th Party Congress in late 2022.

Despite increased economic interdependence and rising trade and investment flows, China´s political relations with key Asian neighbours are partly strained, due to Beijing´s rising military clout and a more assertive stance in the region. Japan and several Southeast Asian states are worried about overlapping claims in the East China and South China Seas, while in 2020 Indian and Chinese troops clashed in a disputed boundary in the Himalayas. Beijing has also beefed up its military presence in the Taiwan Strait.

Sino-US relations will remain difficult, as the issues that led to a deterioration under the Trump administration remain. Next to trade, these also encompass a non-level playing field for direct investments, intellectual property issues, several aspects related to China’s role in the world economy, human rights and rule of law issues, and growing competition for political influence in the Asia-Pacific region. Due to the differences over political and economic and order principles, neither a significant de-escalation nor a comprehensive trade agreement are in sight.

With the war in Ukraine ongoing, China faces the challenge of a difficult balancing act. During a summit in early February 2022, Beijing deepened its strategic partnership with Moscow. Officially China takes a neutral stance in the conflict, and stated that it will maintain its normal trade cooperation with Russia, despite the comprehensive sanctions imposed by Western states. However, providing Russia with substantial economic and financial support could severely strain relations with the US and the EU, both important trading partners for China. This would also increase the risk of Chinese businesses and banks to be affected by secondary sanctions.

Marked slowdown of economic growth in 2022

The Chinese economy expanded 8.1% in 2021, returning to pre-Covid-19 levels. However, growth lost momentum in H2, and GDP increased only 4% year-on-year in Q4, due to renewed Covid-19 outbreaks, power shortages and issues in the property sector. We forecast that Chinese economic growth will slow down to less than 5% in 2022, as the headwinds felt in Q4 of 2021 will continue to impact GDP expansion. Currently, further Covid-19 outbreaks in China and impacts of the war in Ukraine (e.g. sharply rising commodity prices and lower demand from key export regions like Europe) remain downside risks for the economic outlook. 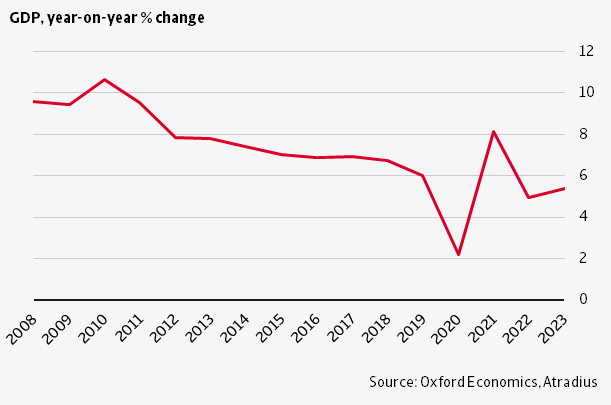 China still pursues a “zero-Covid” strategy, imposing stringent containment measures in areas where infections surface (strict lockdowns, extensive testing, robust contact tracing systems and quarantine mandates). Therefore Covid-19 outbreaks, although small by international standards, constrain domestic consumption and have a negative impact on supply chains. Since early March 2022, Covid-19 cases are have increased, and temporary lockdowns and/or restrictions have been imposed on the province of Jilin, as well as on some bigger cities like Shenzhen (a major manufacturing hub) and Shanghai.

Currently we expect private consumption growth to slow down to less than 5% this year. Retail sales will increase by just 5.4% after growing 13.4% in 2021, and the hotel and catering segment´s performance remains sluggish due to travel restrictions and local Covid-19 outbreaks. Apparently consumers tend to save rather to spend due to Covid-19-related uncertainty. Should the current surge in Covid-19 cases in combination with the zero-Covid policy persist, both retail sales and household consumption could deteriorate in H1 of 2022, leading to a GDP growth rate below the current forecast. 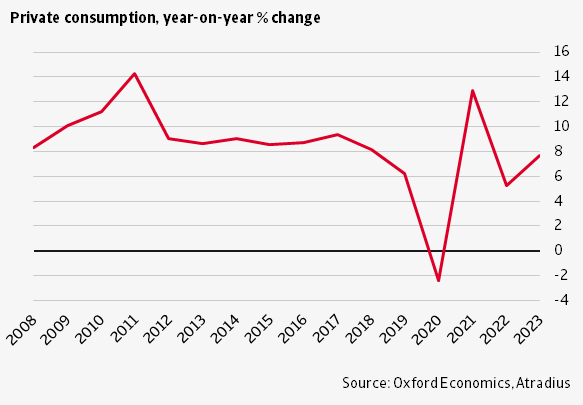 Exports increased by more than 18% in 2021, but growth started to decrease in Q4, and is likely to slow down to 4.5% in 2022. This is due to ongoing transport and electricity supply bottlenecks, additional lockdown measures and geopolitical issues. In particular, lower demand from Europe (e.g. for consumer goods) triggered by the economic impacts of the war in Ukraine could dampen Chinese exports further.

While we have not yet seen a decoupling of the trade relationship between the US and China, President Biden has also not lifted the tariffs imposed by the Trump administration, which will continue to have an impact on a wide range of Chinese export goods. A further escalation of the Sino-US trade dispute is not off the table, given the ongoing issues (e.g. Chinese subsidies and intellectual property theft) and current tensions in the bilateral relationship. Therefore, the ongoing Sino-US trade dispute and increasing political strains between the two great powers remain a downside risk for Chinese export performance.

The real estate sector, which accounts for about 25% of economic output will face subdued investment this year and remain weak. Worried about a potential housing bubble and an overheating of the real estate sector, in August 2020 the government imposed stringent regulations to rein in real estate investment. The regulations result in tighter financing conditions for real estate companies (liability-to-asset ratio excluding advance receipts of less than 70%, a net debt-to-equity ratio of less than 100% and a cash to short-term debt ratio of one).

As a result, since mid-2021 several real estate developers have faced major liquidity problems. Evergrande, the country’s largest developer, even came close to default. The crisis affected banks, investors, and upstream and downstream industries like construction, home appliances, chemicals and metals. Meanwhile other companies have taken over Evergrande’s assets, and the government has a strong incentive to complete the affected construction projects in order to avoid social implications. While the implementation of some regulations has meanwhile been eased, debt growth of many real estate developers still remains restricted, and many of them continue to struggle under the government’s deleveraging efforts. Recently Evergrande and some other property developers announced that they were not able to publish annual results by March 31, as required by stock listing rules. This has further deepened market concern about the industry´s financial health. A major slowdown of the sector remains a downside risk for economic growth in 2022.

The Chinese banking sector is affected by the current problems in the real estate sector. The introduction of tighter regulatory control over property lending has a negative impact on several lenders with exposure to real estate firms, and non-performing loans are increasing. However, the risk of a financial crisis remains low, as the banking system is liquid and vastly state-backed. The financial problems of Evergrande and other developers have been ring-fenced, and the authorities have the power to instruct banks to absorb the liabilities of distressed financial institutions.

China is likely to pursue an accommodative monetary policy this year, as the authorities prefer to support the economy to the objective to contain credit growth. We expect the People's Bank of China to lower official interest rates somewhat in H1 of 2022.

Fiscal policy will remain loose in 2022, in order to contain a sharper slowdown of economic growth. As in 2021, business investments will benefit from government incentives. Beijing announced to increase spending on some of the 102 mega-projects outlined in the current Five-Year plan (2021-2025). Additionally, the administration announced tax cuts for SMEs and manufacturing businesses. We expect fiscal measures to shore-up liquidity in the real estate sector and to bolster domestic consumption if needed. We forecast the fiscal deficit to remain relatively high in 2022 (7.6% of GDP) and 2023 (6.6% of GDP).

With about 25% of GDP, the official public debt ratio remains low. So-called ‘augmented debt’, which includes the central government, local governments and their financing vehicles, as well as other off-budget activities, amounts to about 110% of GDP. With most of this debt domestically financed (foreign debt amounts to only 17% of GDP, mainly from private debtors), it remains at a sustainable level. However, in combination with the huge debt pile of non-financial corporates (at about 150% of GDP in 2021) and household debt (at about 50% of GDP) there is a downside risk of financial stress, defaults and market turmoil in the coming years.

In 2022, China´s international reserves remain abundant, with 14 months of import cover and 2.9 times the external financing requirement. The ample reserves are due to China’s structural current account surplus, forecast at 1% of GDP this year. The surplus is expected to decrease somewhat in the coming years, due to a slow recovery of outbound tourism and high demand for commodities. Foreign debt remains sustainable in 2022, at 14% of GDP and 75% of exports of goods and services.

China´s ongoing efforts to rebalance the economy (away from export-oriented investments towards more consumption-led growth) will be reinforced by the efforts of the US and other countries to reduce their reliance on China. Additionally, Beijing puts emphasis on increasing technological self-reliance (e.g. in the strategic fields of 5G, the ‘internet of things’ and cloud computing), in order to reduce its dependence on other countries, in particular on the US.

The so called ‘dual circulation’ concept is about improving the domestic circulation of demand and supply with the intention to make the Chinese economy more robust against shocks. At the same time, it is planned to go forward with market-oriented reforms in order to reinforce the domestic growth strategy by attracting foreign direct investments (FDI) and portfolio inflows.

Lower growth outlook in the mid-term

Over the last two decades, China achieved high productivity growth by a successful integration into the global economy. However, further integration gains will be more modest, and productivity gains will fail to offset the drag on efficiency caused by the self-sufficiency drive under the "dual circulation" model. Other issues that could impact China´s growth potential are a high savings ratio, the rapidly ageing population and overcapacity in various industrial sectors. We expect that Chinese annual GDP growth will slow down below 4.5% in a few years’ time.

China: use of credit insurance on the rise

Businesses polled in China plan to mitigate customer credit risk associated with B2B trade through a more frequent use of trade credit insurance over the next months.