The proportion of past due B2B invoices declined and there was a significant improvement in Ireland’s payment duration. However, still 56.3% of Irish respondents said that overdue invoices have affected their businesses over the past 12 months. In order to manage this impact, many of them had to take specific measures to correct cash flow or to postpone payments to their own suppliers. The proportion of receivables written off as uncollectable is lower than in 2017 and is in line with the regional average.

Trading on credit to attract and retain customers 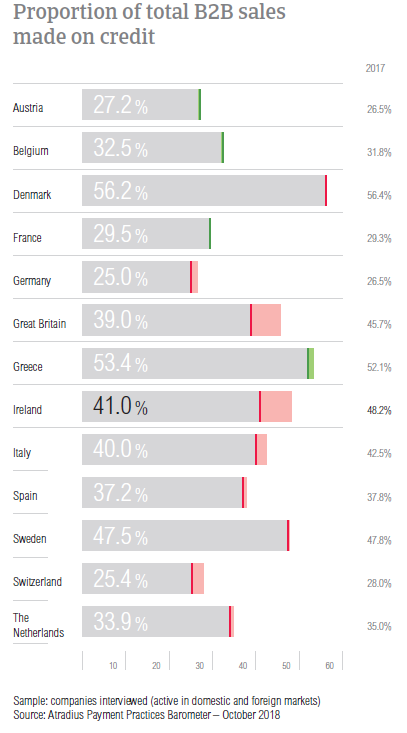 The proportion of total B2B sales made on credit in Ireland dropped significantly from 48.2% in 2017 to 41.0% this year. Despite this being one of the biggest decreases in the region, Ireland’s proportion of B2B sales on credit is still slightly above the regional average.

Respondents in Ireland trade on credit with their domestic and foreign B2B customers because credit sales are seen as a way to expand business domestically and internationally and they are important in nurturing business relationships and developing new ones.

We trade on credit because we trust our customers and established a long partnership over the years.

Looking at reasons why they would refuse to grant credit terms to their domestic B2B customers, 37.5% of Irish respondents mentioned the customer’s poor payment behaviour and 31.3% the financial weakness of the customer. A very frequent reason for not selling on credit to B2B customers abroad, mentioned by 77.8% of respondents, is the lack of information on the customer’s business or payment performance. The customer’s poor payment behaviour was the second most frequently reported reason for not trading on credit internationally (mentioned by 27.8%).

We trade on credit to develop our overseas business and increase orders.

The proportion of past due B2B invoices in Ireland has also seen a significant decrease, from 45.1% in 2017 to 37.5% this year. Slightly more domestic invoices than foreign invoices remained unpaid by the due date. 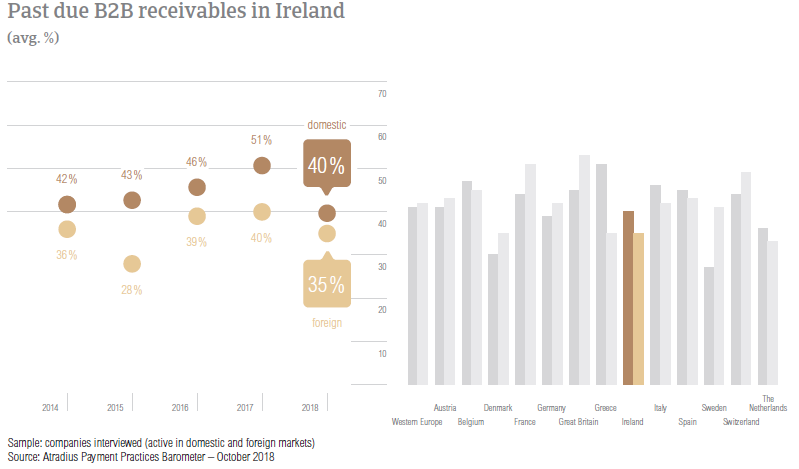 In 2018, the average Days Sales Outstanding (DSO) figure recorded in Ireland is 48 days, one day shorter than in 2017. Despite this being the fourth consecutive year with a decrease, Ireland’s DSO is still four days longer than the regional average. Most respondents in Ireland (57.4%) do not expect any changes in their company's DSO over the coming 12 months. Of those who foresee changes, 21.6% expect an increase and 21.1% a decrease.

Lost revenues for 15.1% of companies due to overdue invoices 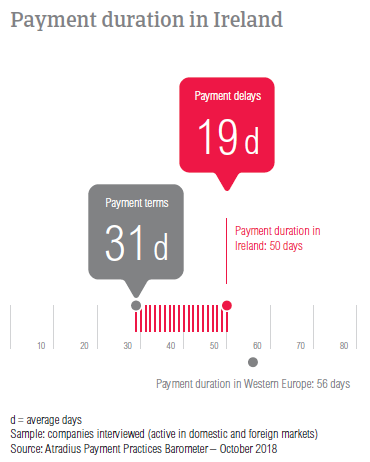 According to the survey findings, payment delays in Ireland have dropped significantly in 2018. Domestic B2B customers delay payments, on average 24 days and foreign B2B customers 18 days. This compares to 29 and 24 days in 2017.

The significant change in payment delays caused a major drop in Ireland’s average payment duration. This decreased from 57 days in 2017 to 50 days this year.

For 43.7% of Irish respondents, overdue B2B invoices had no significant impact on their businesses over the past 12 months. This means that the majority (56.3%) reported negative consequences of overdues. 21.4% of suppliers said that they needed to take specific measures to correct cash flow and 17.5% that they needed to postpone payments to their own suppliers. For 15.1% of suppliers, overdue B2B invoices caused revenue loss.

Extensive use of online invoices and faster payments

The majority of respondents in Ireland (78.9%) are already making use of online invoicing (e-invoicing). This is the second highest percentage registered in Western Europe, after that of Denmark. Only 12.3% said that they do not invoice their domestic and foreign B2B customers online. The remaining 8.4% are introducing electronic invoices in 2018.

Asked about the effect of e-invoicing on payment duration, the majority (68.0%) believe that after invoicing electronically, they received payments quicker. In contrast, 2.9% of Irish suppliers said that they have experienced the opposite, slower payments and 29.1% said there was no noteworthy effect on payment duration. The proportion of uncollectable receivables in line with the regional average 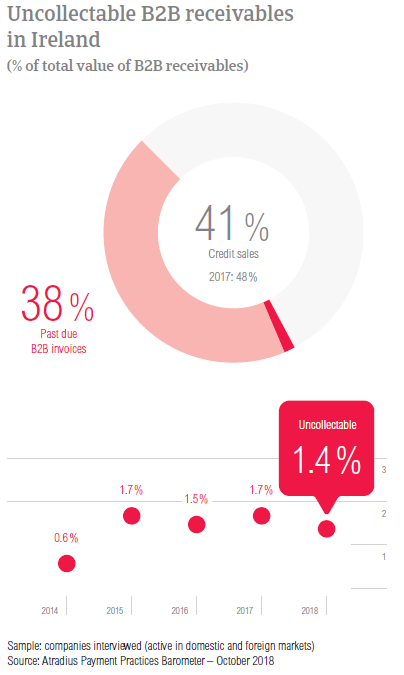 In 2018, the average proportion of uncollectable receivables in Ireland dropped slightly from 1.7% in 2017 to 1.4% this year. Domestic B2B receivables were written off almost four times as often as foreign B2B receivables.

In Ireland, uncollectable receivables originated most often from B2B customers in consumer durables, construction, electronics, business services and services. The main reasons why B2B receivables were uncollectable are bankruptcy (reported by 53.8% of respondents), the high costs of pursuing debtors (36.6%) and the failure of collection attempts (35.9%).

Mainly optimistic about the coming 12 months 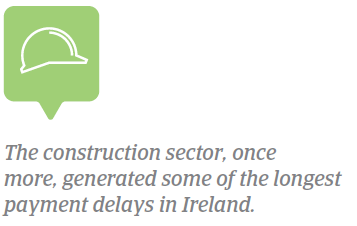 Looking at the coming 12 months, 52.0% of suppliers in the construction sector and 46.0% in the metals sector mentioned that they do not expect changes in the payment behaviour of their B2B customers. Should changes occur, these are likely to be positive.

Pound sterling depreciation in the aftermath of the Brexit referendum in June 2016 has had significant impacts on UK-EU trade flows.

Having drawn from the expertise of Atradius Collections' local offices, the International Debt Collections Handbook explains the different regulations and procedures for debt collections in Ireland.