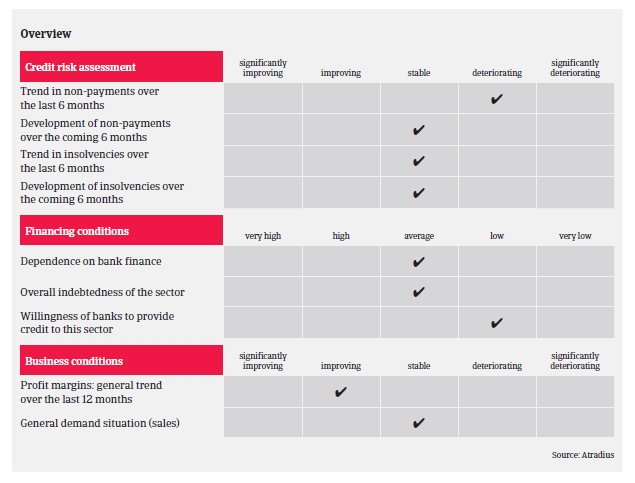 In 2019 non-food retail growth is expected to slow down to 1.5%, in line with lower household consumption growth (forecast to increase 1.9% after growing 2.5% in 2018). Furniture and DIY stores benefited from the strong housing market in recent years, but housing growth has started to weaken.

Stores within the non-food retail sector have varying degrees of success. Drug stores perform well, while consumer electronics continues to shrink. Turnover growth in fashion retail has become heavily dependent on weather conditions, while competition from large online retailers in this segment is fierce. 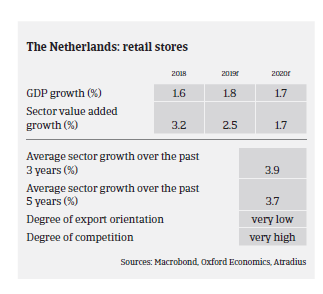 The number of brick-and-mortar stores has significantly decreased in recent years, and various retail chains have shifted their focus to online sales. We have seen a significant number of new foreign retail chains entering the Dutch market, especially in fashion retail, but also in the DIY and kitchen segments.

Competition remains very fierce in the largely saturated consumer electronics market, where bottom prices have been reached in various categories and the number of retail chains has decreased significantly over the last 10 years. Despite generally decreasing sales, the top three online players achieved such strong growth rates over the past couple of years that they pose a serious threat to the (remaining, but ailing) established chains. Large foreign platforms such as Amazon and Alibaba are increasingly paying attention to the Dutch market, which will result in even more pressure on prices and the margins of established players.

While the financial gearing of non-food retailers is average in general, willingness of banks to provide loans to the sector is rather low. Payments in the Dutch non-food retail sector take 60 days on average, and while non-payments have increased in 2018, they are expected to level off in 2019. Our forecast is for non-food retail insolvencies to level off or to increase slightly in 2019, in line with the forecast of a modest 2% increase in Dutch business insolvencies after several years of decreases.

Our underwriting approach for the industry remains generally neutral to cautious, given the current and future challenges for the industry, especially regarding the major shift to online sales. 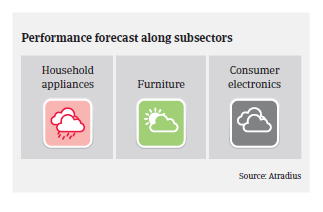 Our underwriting stance for the furniture segment is open, but we remain more cautious with consumer electronics retail. The same accounts for textiles and footwear due to fierce competition in the market, triggered by large online retailers. Compared to last year we have tightened our underwriting stance in the household appliances retail segment, amongst other things due to ongoing financial difficulties of two large retail chains.

Growth is set to continue, but the strong export orientation makes many food businesses susceptible to trade disputes and price/currency fluctuations.

The Netherlands: the biggest DSO increase in the region

In 2018, the average DSO recorded in the Netherlands is 46 days, an increase of five days compared to 2017. This is the biggest increase in Western Europe.