Indonesia´s economy is expected to grow 5.1% in 2017 after a 5.0% increase in 2016, mainly driven by robust private consumption and business and government investments. The administration strives to strengthen the economy through improved infrastructure and increased foreign investments. Additionally, it intends to develop the manufacturing base, diminish dependence on the resources sector and reform the less productive agricultural sector. A slowdown in China’s economy in 2018 will exert pressure on Indonesia’s exports, causing GDP growth in Indonesia to slow down slightly, to 4.8%. 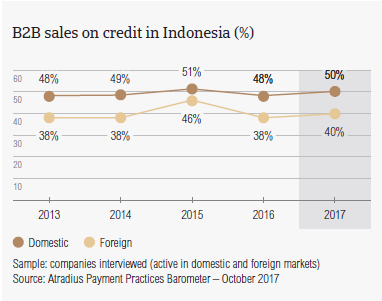 With an average of 52 days, Indonesia´s invoice to cash turnaround is shorter than the Asia Pacific average of 55 days.

Insufficient availability of funds was the most frequently mentioned reason for payment delays in Indonesia and in the Asia Pacific region overall. 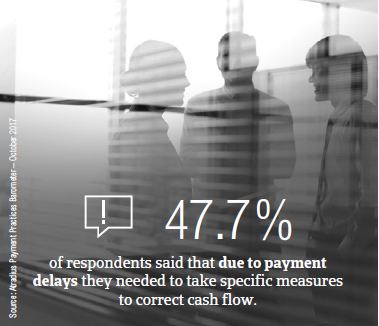 Respondents in Indonesia were the most likely of the respondents from countries surveyed in the Asia Pacific region to increase their use of credit management tools to protect against the potential impact of a slowdown in Asia, US protectionism and Brexit. 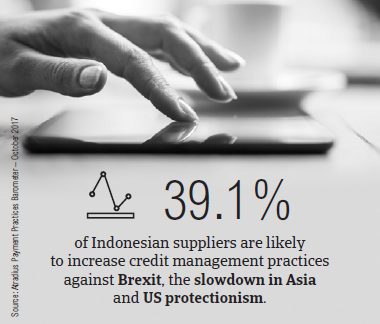 Of the Asia Pacific countries surveyed, Indonesia had the third highest value of B2B receivables written off as uncollectable (2.1%) (India: 2.6% and Hong Kong: 2.4%). Indonesia´s figure is on par with the percentage registered at regional level, which also stood at 2.1%.

More respondents in Indonesia expect a significant improvement than deterioration in the payment behaviour of their B2B customers over the coming 12 months.

Indonesian chemicals sector growth is driven by demand from the construction and automotive industries and an increasing population with rising incomes.

China is rebalancing its economy away from exports and investments towards consumption. This is weighing on GDP growth of its trading partners.