The Irish economy is expected to grow by about 2.5% in 2019, but remains exposed to ongoing economic uncertainties stemming from the Brexit decision. 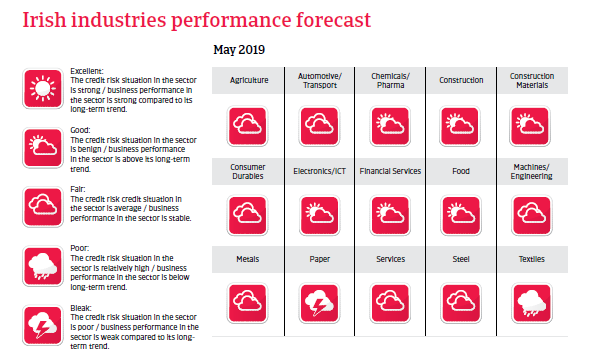 Decrease in insolvencies expected to end in 2019

After six years of increases, Irish business insolvencies have, since 2013, recorded annual declines, decreasing 13% in 2018. However, this positive trend is expected to end in 2019, with insolvencies forecast to increase slightly.

This increase is mainly due to elevated uncertainty around Brexit, with the manufacturing and food sectors most exposed due to their high dependency on exports to the United Kingdom. Both could suffer from exchange rate volatility and potential cross-border trade disruptions. 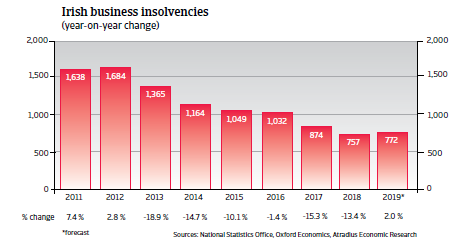 The Brexit decision casts its shadow

The Irish economy grew robustly in 2018, based on export growth and solid domestic demand. In 2019 and 2020 GDP expansion is expected to slow down as export growth decelerates. Domestic demand is forecast to remain robust, driven by rising employment and wage growth. The housing market will remain buoyant, with construction activity increasing further. Inflation is expected to increase to about 2% in 2019, mainly driven by wage growth.

Due to past fiscal austerity, the budget deficit has diminished and public debt, while still high, has decreased.

Economic prospects are more uncertain than in the past. As the UK market accounts for about 15% of Irish goods and 20% of services exports, a potential economic downturn in the UK and the outcome of the on-going EU-UK negotiations (towards a “soft leave” or “hard leave”) could affect Ireland´s economic performance.

Another issue is the high indebtedness of some households and businesses, which makes them vulnerable to any future interest increases by the European Central Bank.

Despite efforts of food exporters to diversify shipments away from Britain, a hard Brexit remains a major challenge, also for shipments to mainland Europe.

The UK leaving the EU without a deal would be a major disruption, causing business insolvencies to be higher in the UK and EU27.

Ireland: 56.3% of suppliers felt the impact of overdues

For 56.3% of Irish respondents reported negative consequences of overdues over the past 12 months. For 15.1% of suppliers these led to revenue loss.